When reading the "Delegate not working" thread on the MS Technet (http://social.technet.microsoft.com/Forums/windowsserver/en-US/2b8b6afb-a712-4b4f-9613-bf8ff9330127/delegate-control-not-working?forum=winserverDS) I remembered companies I worked for in the past usually create new computer objects for the computers they bought. Computers are then installed and delivered to the user by onsite support teams that work as a local Administrator but have limited access to the Active Directory.

Even though they need to join a newly installed computer to your Directory.

The process is as followed

1.       In a first step your onsite services provides a consolidated list of computer names and Ous to store the computers.

2.       Now you go and create all the computer objects and you set up the permission to join a computer to the domain by the onsite teams.
In my case we created a group called "ComputerJoinAdmins". All onsite team admin accounts are member of that group.

3.       In the final step the onsite team  can install the computer and join it to your domain. 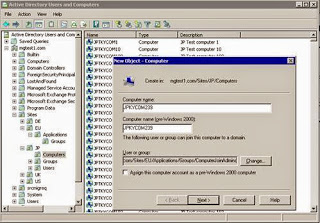 Unfortunately that procedure is not very useful for your production environment where you may have hundreds of computers that are changed (replaced, re-installed, …) over the day. In that case I am asked frequently for a procedure to set up a computer object from  a script, using powershell.

You may have already noticed , when using the ActiveDirectory module with Windows Server 2008 or 2012, in Powershell there is a cmdlet called "new-adcomputer" , (see also http://technet.microsoft.com/en-us/library/ee617245.aspx). While the cmdlet is able to create your computer object you cannot directly set up the "that users can join that computer to the domain" setting. So you still need to setup the permission to allow a user or group to join a computer to your domain, even if you already created /pre-populated the object.

The difference between a computer set up with "default" permissions, so it will only inherit permissions from your OrganizationalUnit and a computer object with the join permissions is seven ACL entries.

Now we can do the required tasks

1.       Create the computer object to have an object you can grant permissions for your ComputerJoinAdmins.

2.       Add access rule entries (ACEs) to your object for the group ComputerJoinAdmins.

And here we go for a single computer called mobile 1000 in an example OU called "OU=JP,OU=Sites,DC=mgtest1,DC=com".

# Initially we set up the names for our Onsite team group

# and our computer name

# my case that is finally transferred to a variable called UserSID

# … and add it to the already present ACL

# now we have still a current ACL with the object while we have the ACL we need in $mycomputeracl.

# finally we apply the new ACL to the computer object using set-acl.

Now we are finished with that computer and you can create a loop to go through your list of computers.